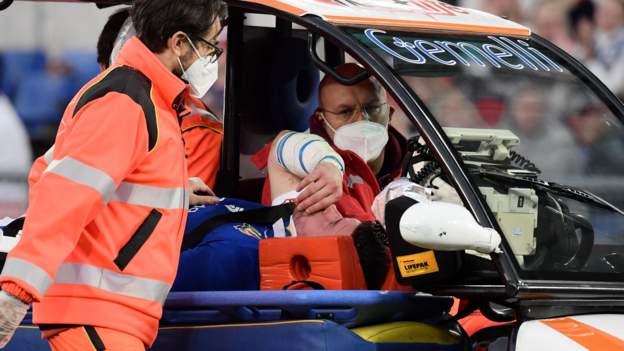 England prop Ellis Genge said he knew something “horrible” had happened to Italy’s Sebastian Negri when he “heard him choking” during Sunday’s game.

Replacement Negri had been on the pitch for 16 minutes in the second half when he was knocked out in a collision.

“I gave him a slap to see if he reacted,” Genge said.

“He just carried on choking so I didn’t know if he had swallowed his tongue – that’s why I tried to roll him on to his side.”

Once Genge called attention to Negri’s condition, the 27-year-old received immediate medical attention and was driven from the pitch on a stretcher during England’s 33-0 Six Nations win in Rome.

“I’m not a master in medicine, but I’m pretty sure you are supposed to put them in the recovery position so I tried to do that. I was quickly ushered away by the medics so I let them just carry on,” added Genge.

“It’s horrible when that happens. I don’t know Seb very well personally, but a lot of my friends played at Hartpury College with him and apparently he’s a lovely bloke.

“He’d just come on and he’s a big player for them and for that to happen wasn’t nice to see. I hope he’s well. I really do. I really don’t like seeing people being hurt like that.”

“Thank you so much Ellis Genge,” Negri said to the prop on Twitter. “You are a top man. All good this side and feeling a lot better.”

Negri’s was not the only head injury sustained during England’s 33-0 Six Nations win in Rome.

There was some confusion when wing Jack Nowell – making his first start since the 2019 World Cup after a string of injuries – took a blow to the head.

A doctor came on to the pitch to examine Nowell and told referee Damon Murphy he wanted to wait until the independent doctor in the stands had reviewed footage of the collision.

Murphy ordered the sides to play on, allowing Nowell to continue for a short time before the independent doctor took him off for a head injury assessment which he failed.

“It is so sensitive and we’ve got the backdrop of dementia cases and World Rugby doing everything they can to try to mitigate the risk of players taking blows to the head,” former England wing Ugo Monye said on BBC Radio 5 Live’s Rugby Union Daily.

“It could be as simple as the doctor didn’t see it. That is possible with 30 players on the pitch in a fast game.

“Could that whole episode have been better? Absolutely, but before we get into a witch hunt, it’s important we have a conversation about how that happened.

“We’re trying to combine modern technology with the potential for human error. I do not think it is anything more sinister than that.”

The confusion over Nowell follows an incident in an England Under-20s Six Nations game where a doctor disagreed with a referee’s decision to send a player off for a head injury assessment.