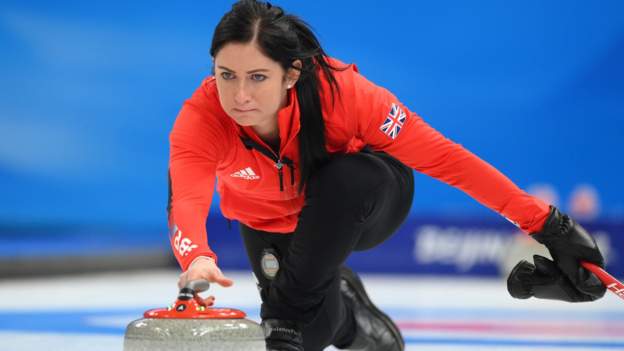 Muirhead needed to draw to the button for victory with the last stone but overthrew to give the Swiss victory.

Muirhead, Vicky Wright, Jen Dodds, and Hailey Duff had been in control at 4-2 after seven ends but could not punish more Swiss errors and were pegged back.

They next face defending champions Sweden at 12:05 GMT.

Before that, Bruce Mouat’s rink start their round-robin fixtures against Italy at 06:05 in the men’s competition.

The first half of the women’s match was cagey, as might be expected at the start of an Olympic competition which features nine round-robin matches with the top four advancing to the semi-finals.

But Britain took control in the sixth end when Switzerland’s Alina Paetz missed a takeout and allowed Muirhead to draw in for two and a 3-2 lead, and they capitalised on another error in the next to stretch their advantage to two.

However, Muirhead’s miscued attempt in the eighth allowed Switzerland to level, and then an overthrown stone by the British skip limited her side to just one with the hammer in the ninth when there was a chance for two to move close to victory.

Paetz missed the chance to win it in the last for the Swiss, but her single sent the match into a deciding end and gave Britain the hammer.

But – as was the theme later in the tie – Britain were unable to capitalise as they left Swiss stones in the house and Muirhead with a pressure shot for victory.

The line was good, but the weight was a fraction too much and her stone agonisingly drifted a foot longer than the Swiss scoring stone.