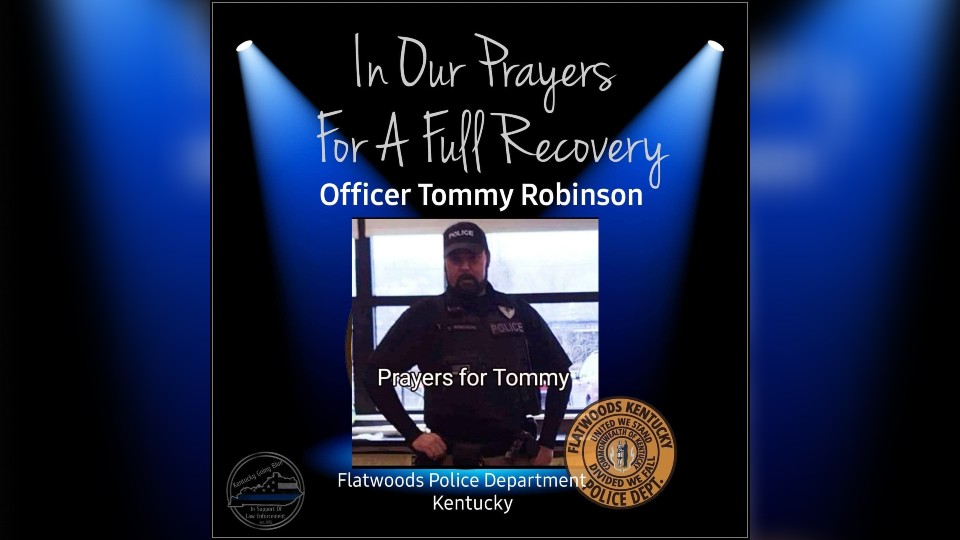 FLATWOODS, KY (WOWK) – Flatwoods Officer Tommy Robinson has been released from the hospital after being shot in the neck in the line of duty, according to the Flatwoods Police Department.

Flatwoods Police Chief David Smith says Robinson is going to a rehabilitation center for further recovery. He also adds several officers went to Cabell Huntington Hospital to see Robinson off as he was released.

“He is progressing very well, but it will still be a long road,” Smith said.

Yesterday, the chief provided a statement from Robinson’s family thanking everyone for their support as he recovered.

Officer’s sister dispatched call when her brother was shot

Robinson was shot while responding to a call of a suspicious person in the Walnut Street area. A suspect now faces charges of attempted murder in connection to the shooting. Robinson has only been with the department for a few months, according to Greenup County officials.

The statement from Chief Smith thanking everyone who helped Robinson through this part of his recovery is below:

Thank you to the Huntington Police Department and the Cabell County Sheriff’s Office for coming to the hospital to see Tommy off and blocking traffic and escorting us to the Kentucky state line. They are amazing at escorts with the motorcycle police units.

And finally, thanks to all the agencies that came by to be by Tommy’s side as he was brought out of the hospital to leave for his physical rehabilitation. Forgive me if I leave anyone out.