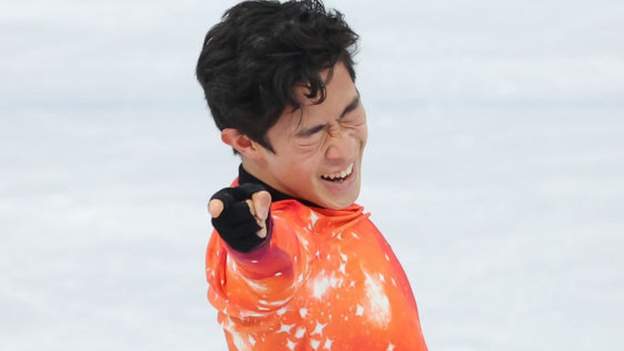 For Chen, 22, it was redemption after nerves destroyed his jumps when he was the favourite four years ago.

“It means the world. I’m just so happy,” Chen said. “It’s a whirlwind right now. I had a blast out there.”

With ground to make after after Tuesday’s short programme, Hanyu, 27, had been trying to perform the first quadruple axel in competition but it ended in a fall and he came fourth.

The climax of the event took place against the backdrop of uncertainty over what might be the legal issue that has so far prevented the handing out of the medals won in Monday’s team event.

Four years ago, Chen – then aged 18 – arrived at the Pyeongchang Games as favourite for the gold medal but nerves got the better of him and he failed to land a single jump in his short programme.

That meant he was in 17th place going into the second day, and although he wowed the judges with the top score in the free skate, the damage had already been done and he could only finish fifth.

This year, the skate was firmly on the other foot.

It was Hanyu who lost ground in Tuesday’s short programme, missing his opening quadruple salchow because of a “hole” in the ice, while Chen put in a stunning display that earned a world record score for a short programme.

Having watched Hanyu fall twice and his closest rivals perform before him on Thursday, Chen knew what he had to do when he took to the ice as the final skater.

Performing to Elton John’s Rocket Man, the American nailed his jumps in a performance that was as fun as it was technically superb.

Since his disappointment four years ago, Chen has gone on to dominate the sport, winning three world championships in a row before finally getting his hands on Olympic gold.