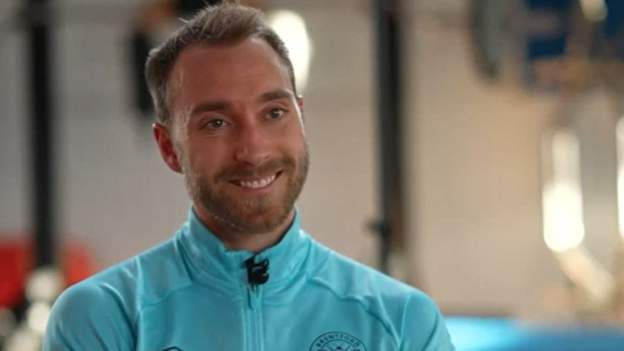 Christian Eriksen says it feels like a miracle to be able to resume his career with Brentford after collapsing while playing for Denmark at Euro 2020 last summer.

The 29-year-old has been fitted with an implanted cardioverter-defibrillator (ICD), a type of pacemaker, after suffering cardiac arrest.

He has joined the Bees on a six-month deal after his release by Inter Milan.

“The first thing is to show the gratitude,” Eriksen told BBC Sport.

“To the people around me, the team-mates, the doctors first on the pitch, the team doctors and paramedics and then at the hospital, to do everything and check everything.

“Then all the messages from people to show support for me and what my family have been through. It has been really lovely to see all the grateful messages.

“I am very lucky and I have told them face to face, I am very happy they did what they did otherwise I would not be here.”

He added: “For me it was unlucky in a lucky place. I wouldn’t hope anyone to get it, I never thought I would get it myself when it happened but in the place it happened I was lucky with the people around me acting so quickly. I was really grateful the doctors were in that place.

Eriksen says he feels in better condition now than before the incident, will do everything he can to reach his former playing level and does not fear the challenges ahead.

“I won’t change my style of play,” added Eriksen. “I have had the time to be disciplined for the last six months to do extras, so even now maybe I am in a better condition than before, just the football missing.

“I feel like me so don’t see a reason why I can’t get back to the same level.”

‘I was gone from this world for five minutes’

The day of 12 June 2021 will be a date etched in Eriksen’s memory, one when he remembers all but the five minutes in which he was “gone from this world until they got my heartbeat back”.

Denmark were playing Finland in their opening game of the Euros, delayed by a year because of Covid, when the midfielder collapsed on the pitch in the 41st minute.

He received CPR and after 15 minutes of treatment was carried off on a stretcher. Eriksen was awake in hospital and, after a delay of about three hours, the match resumed with Finland winning 1-0.

“At that time I had no idea what had happened, then it goes through my head: ‘Did something happen with my legs? Did I break my back? Can I lift my leg up?’ – all small things I was trying to do to see what happened.

“Then in the ambulance I heard someone say ‘how long was he out for’ and someone said ‘five minutes’ and that was the first time I had heard I was gone.”

Asked if it will feel like a miracle to return, Eriksen added: “Definitely. I think it will get more and more obvious the closer it gets to being in a real game – being in a stadium, being in a game, you get all the emotion and adrenaline from that.”

‘If anything happens I am safe’

Eriksen’s Inter Milan contract was cancelled by mutual consent in December because players fitted with an ICD cannot compete in Serie A.

However, the Premier League does not have the same regulations.

After leaving Inter, Eriksen started training alone at Danish side Odense Boldklub – where he was previously a youth player – and outlined his aspiration to resume his playing career in order to play for Denmark at the 2022 World Cup in Qatar.

Brentford boss Thomas Frank says the Dane could be the club’s “greatest signing ever” and his arrival saw the biggest day of kit sales outside kit-launch days – 30 times the usual demand at this time of year for the Bees.

Eriksen says he did not think about returning to football in the few days that followed the incident but has never feared his career would be over.

“I wanted to get all the tests done and get to talk with all the doctors to see what is a possibility and what is not,” he said.

“But then ever since, I think less than a week after, they said ‘you have an ICD but otherwise nothing has changed, you can continue like a normal life and there is no limit to what you want to do’.

“It is not going to affect me in 30 years what I am doing now and that was the main aim, otherwise if they tell me something has changed then I will be on another page.

“I don’t see any risk, no. I have an ICD, if anything would happen then I am safe.”

‘I am not scared of the challenges and the bullies’

Eriksen says he just wants to get back to “normal” and returning to playing Premier League football is a major step towards that goal.

“To be honest, I didn’t really go down,” he said about his mental state after the incident.

“I was really determined step by step with the plan I made with the doctor from the time of my prognosis and the different phases I had to go through to get everything tested.

“It was a slow build up, taking all the time to get tested properly and my family was very supportive.

“They knew I wanted to get back and get the green light if it was possible, but I also know they would know if something happened in the meantime and if it was something worse then I wouldn’t continue.

“I love my family and their support, from what they’re going through now and what they went through before.”

Eriksen says doctors believe it was a one-time occurrence, with no historical or family problems, and now he just wants to work towards a positive future.

“I have been cleared to do everything from the doctors, so in that sense it doesn’t really matter what was the reason,” he said.

“Continuously I have been given the green light that everything is OK for the future.”

The playmaker is also not worried about his ICD and what might happen should he receive a robust challenge, given the physical nature of the Premier League.

“I don’t really have any scared feelings about it, I don’t feel my ICD so if it gets hit I know it is safe enough,” he added.

“I am not scared of the challenges ahead and the bullies in the game, no.”

‘It is going to be very special’

While his physical condition is good, Eriksen says he is still a few weeks away from making his Brentford debut having only recently joined up with his team-mates in training.

“I have done a lot of running and a lot of tests, so the condition is good, but the football touch is something you get in games – to get there is still a few more weeks,” he said.

“At the moment, when the coach sees me fit and wants me to play then I’ll be able to. But at the moment we just take it day by day.”

Eriksen also says he feels grateful to come back to London, having spent seven seasons at Tottenham.

“For me and for my family, for the next six months really this was the perfect situation,” he said. “We pretty much know the area, it is close to where we were for many years in north London.

“First of all for family and also football-wise, to get the chance to play in the Premier League and get to know the people here. Of course, I knew the coach, I knew [fellow Dane] Thomas before and a lot of team-mates I know from Denmark, so it is an easy group to join.”

And it will be a “very special” moment when he takes the pitch again for a competitive match for the first time since June last year.

“It has been a long build-up and it still is going to be a long build up from day to day,” said Eriksen. “It feels like it is getting closer and [I am] patient for the right timing.

“But it is going to be very special to be able to walk out on the pitch and play a match again after probably, at the time, seven or eight months since that happened. It is going to be amazing.”