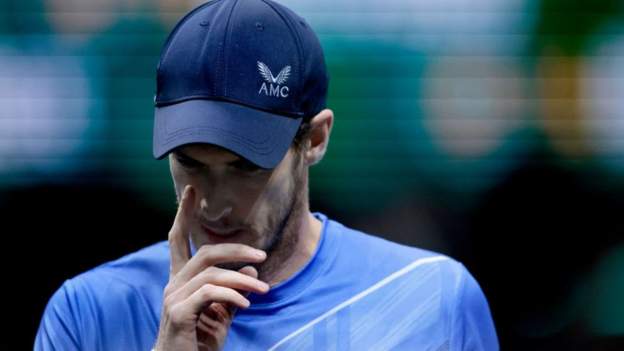 Britain’s Andy Murray was knocked out in the second round of the Rotterdam Open in straight sets by Canada’s world number nine Felix Auger-Aliassime.

The 21-year-old, who reached the quarter-final of the Australian Open last month, won 6-3 6-4.

Murray, 34, broke in both sets but struggled to hold his own serve and Auger-Aliassime took advantage to win in one hour and 37 minutes.

He will now face another Briton in Cameron Norrie in the third round.

“From the start of the match I came ready and focused and that was why I was able to produce a high level from the first point,” said Auger-Aliassime.

“I watched him (Murray) play numerous times so I know how good he could play when he was number one in the world, not so long ago. He doesn’t miss a lot of balls – I really hope he can keeping playing well and get back to where he belongs.”

Auger-Aliassime stormed into a 4-0 lead before holding off a brief response from Murray to serve out the opening set. He then broke in the third game of the second set, only for the Scot to hit back immediately.

But Murray was broken again in the following service game, slamming his racquet into the ground in frustration, and Auger-Aliassime held his nerve to go on and seal victory.

That was only after a winner on his first match point had to be replayed, however, after Murray’s cap fell off during the rally.

Murray approached the umpire, protesting he was “not cheating” but had stopped because of the incident, with Auger-Aliassime then double faulting from the replayed point.

But the Canadian made no mistake with the second match point, putting away a volley to set up a meeting with Norrie.

Murray, a three-time Grand Slam winner, beat Kazakhstan’s Alexander Bublik in the previous round – his first match since his second-round loss at the Australian Open in January.