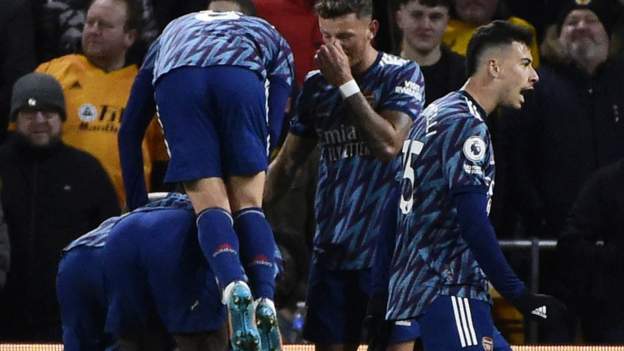 Gabriel scored the only goal and Gabriel Martinelli was given an unusual red card as Arsenal beat Wolves for their first win of 2022.

Defender Gabriel bundled home Alexandre Lacazette’s flick-on to score the only first-half goal Wolves have conceded in the Premier League since October.

Gunners forward Martinelli was sent off in the second half for two bookings shown at the same time for infringements seconds apart – stopping a throw-in and a foul on Chiquinho.

The better chances came after that, with Lacazette shooting wide, but the visitors were holding on at the end.

Arsenal keeper Aaron Ramsdale denied Romain Saiss and Leander Dendoncker and Chiquinho had a shot blocked on the line.

Arsenal’s first win in six games took them up to fifth and denied eighth-placed Wolves the chance of a fourth league win in a row.

More red cards than goals – but Arsenal will be happy

Martinelli’s red card was Arsenal’s fourth of 2022 – with Gabriel’s goal only their second of the year. But this win stops the rot of five games without a victory and boosts their Champions League ambitions.

The major talking point was the red card though.

Martinelli conceded a throw-in and then shoved Daniel Podence as the Wolves player was trying to take it.

A game involving Bruno Lage’s Wolves was never going to involve many goals – they have the third worst attack and the second best defence in the Premier League this season.

They will have been disappointed at the manner in which they conceded as Arsenal scored from a corner routine, although the hosts thought Lacazette fouled keeper Jose Sa.

Sa only had one save to make in the game and while his team pressed late on, they did not create enough genuine chances to score.

Ruben Neves shot wide from a free-kick and Raul Jimenez’s acrobatic volley flew over the bar but they did not test Ramsdale enough.