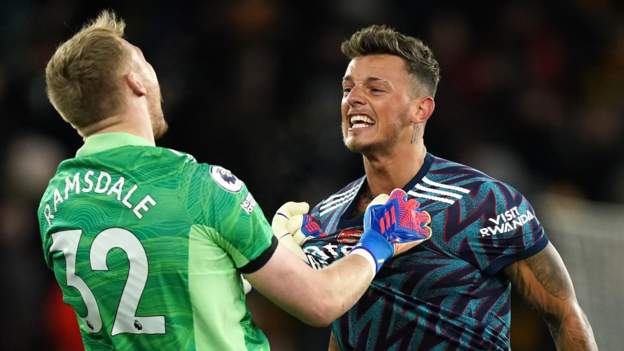 Wolves midfielder Ruben Neves says Arsenal celebrated their win over them like they had “won the league”.

The victory was Arsenal’s first in 2022 and moved them up to fifth in the Premier League.

“We saw the way they celebrated the win and that shows the level we are,” said Portugal international Neves.

“I didn’t see Arsenal celebrating like this in the past 10 years – it was like they won the league.”

Gabriel bundled home Alexandre Lacazette’s flick-on to score for Arsenal, who claimed a first win in six games to close to within a point of West Ham having played two fewer games.

Wolves, who are eighth, thought Lacazette fouled keeper Jose Sa in the build up to the goal.

“We did well but we are struggling to score goals and conceding a lot on set-pieces,” added Neves.

“With their goal there is some doubt about whether it was a foul or not but that’s football. We are used to these decisions.

“We need to improve a lot on scoring goals because we are creating chances but we’re not good enough in that part of the game.