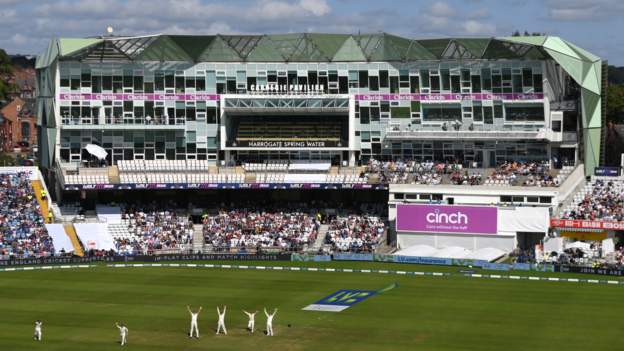 Yorkshire’s right to host England matches has been reinstated subject to the club meeting the remaining key requirements by the end of March.

The England and Wales Cricket Board (ECB) has lifted the suspension after Yorkshire met certain conditions.

Headingley will host a Test against New Zealand and a one-day game against South Africa this summer.

The ground is also set to stage one of the five Ashes Tests against Australia in 2023.

Yorkshire chairman Lord Patel said the decision has “validated and reignited” the “drive for positive progress” at the club.

“It has been a difficult period for Yorkshire and there remains a lot of work to be done, but the level of scrutiny has pushed us towards implementing action which will not only transform this club but can lead the way forward for the sport as a whole,” he said.

Last month Patel said Yorkshire faced a “huge financial crisis” if the ban was not lifted and that regaining its internationals status was key to their planned reforms.

To ensure they will host the third Test against New Zealand, the third ODI against South Africa and matches in The Hundred, the club must meet two remaining criteria by 31 March:

Yorkshire has proposed changing their rules to remove the need for written approval from the Trustees of the Graves Trust, a major creditor of the club, in order to appoint or remove board members.

Patel has said trustees are “fully supportive” of the steps he is taking.

Former Yorkshire chairman Roger Hutton claimed in November that the Trust had vetoed the sacking of chief executive Mark Arthur and director of cricket Martyn Moxon, who have both since left.

Yorkshire is hoping to pass the changes at an extraordinary general meeting, which they were forced to cancel this month after discovering it had not been properly called.

It emerged that the club’s former leadership had failed to file amended club rules with the Financial Conduct Authority (FCA).

Ex-Yorkshire chairman Robin Smith told the Yorkshire Post it meant Patel’s appointment in November was “invalid”, but Patel said a group of individuals were “actively seeking to delay and derail” reform.

The ECB board concluded that Yorkshire have shown a commitment to “building a culture of equality, diversity and inclusion”, had adopted a “zero-tolerance approach” to discrimination, and were working to tackle historic cases of discrimination and ensure the club is welcoming to all.

Yorkshire’s progress will monitored quarterly by the ECB and the Equality and Human Rights Commission (EHRC).

ECB interim chair Barry O’Brien said the board considered “the impact on fans who have bought tickets in good faith and the young people who will benefit from Yorkshire’s improved outreach and pathway provisions”.”I very much hope that the traumatic events that have taken place at Yorkshire over the past several months and years will act as a catalyst for increasing the pace of change throughout the game,” he said.

In September 2021 a report by Yorkshire found Rafiq, who played for the club between 2008 and 2018, was a victim of “racial harassment and bullying”.

The club originally said no-one at the club would be disciplined.

Rafiq told a Digital, Culture, Media and Sport select committee that racist language was “constantly” used during his time at the club and described English cricket as “institutionally racist”.

Hutton and Mark Arthur resigned, while Moxon and head coach Andrew Gale were among 16 people to leave Yorkshire.

In January Rafiq said Yorkshire had taken “a step in the right direction” and their suspension from hosting England games should be lifted.