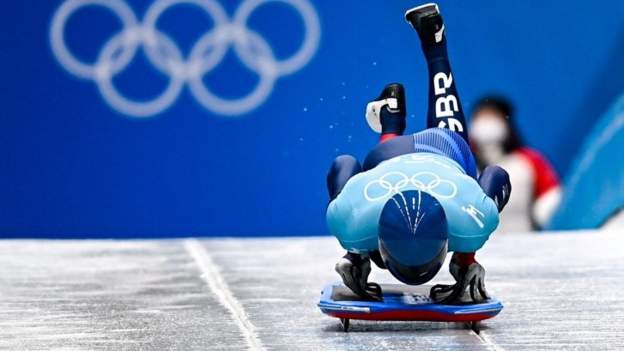 British skeleton racer Matt Weston has acknowledged that “questions need to be raised” over the team’s failure to win a medal at the Winter Olympics.

Weston was 15th and Marcus Wyatt 16th in the men’s event, while Laura Deas and Brogan Crowley are out of medal contention in the women’s competition.

“I think there are quite a few questions that need to be raised but equipment is definitely going to be one of them.

“We’ll review everything from start to finish, how it went, the processes we went through to try to get here, but equipment is definitely going to be on the list of the stuff we review.”

The results mean that Great Britain’s proud record of winning a medal at every Winter Olympics to feature skeleton events has ended with disappointment in Beijing.

Britain had won gold at the past three Winter Olympics and made the podium at five consecutive Games from the sport’s reintroduction at the Games in 2002.

But Weston and Wyatt could not continue that run, while 2018 bronze medallist Deas lies in 21st position after her first two runs and Crowley is 22nd – both out of the running when the women’s medals are decided on Saturday.

Jackson, commentating for the BBC, said: “We need to talk about the British equipment here. Yes, Marcus and Matt have been doing a great job here, they’ve been sliding well. Same with the women, with Laura and Brogan.

“They’ve been sliding beyond their resource. Their equipment is not allowing them to produce speed down the track.”

But Jackson added: “It’s the whole package, the runners, the sled.

“Whatever is happening with the equipment, when you look at Matt Weston’s slide, you can compare it to the best sliders, but there’s just no speed in this equipment.

“Whoever has made these decisions on the technical development side, they’ve gone the wrong way.”

Lizzy Yarnold, the first Britain to win back-to-back gold medals when she triumphed in 2014 and 2018, said the British programme will be asking questions about the performance.

But she told BBC Sport: “Results and success isn’t just about medals and sometimes we have to take stock and try again next time.”

Although Britain does not have any skeleton tracks, it does pride itself on sport science and technical innovation and the marginal gains that can produce.

Yarnold added: “It’s not just about the technology. I think it’s very easy to go to that question. It’s also about learning the track, the fact that athletes are still making some small mistakes on the track. There are lots of other technical things that are going on as well as the equipment.”

Skeleton is one of the most well-funded winter sports, receiving £6,425,000 of UK Sport money for the four-year cycle leading up to Beijing.

But World Cup results since the retirement of Yarnold and Dom Parsons, who claimed bronze four years ago, have been mixed.

Wyatt did win a silver medal at the test event at the Yanqing National Slider Centre in October, while in November, Weston became the first British man to win a World Cup race for 14 years in a three-way tie in Igls, Austria.

Simon Gleave, head of sports analysis at Nielsen Gracenote, said the pre-Games virtual medal table had forecast no medals for British competitors, with Weston coming in as the highest ranked Briton in eighth place.

He added: “No British woman had been on the podium of a major skeleton race since Laura Deas finished third in Calgary in 2019. There had been no British medals at the last three World Championships in the sport.”

This marks a stark contrast to a successful period in the sport, when Yarnold and Shelley Rudman won a host of medals.

Deas has not been in the sport’s top 10 for two years but was at a loss to explain her performance in China.

“I put together two good runs that I think I can be proud of. I can’t tell you now why the speed wasn’t there,” she said.