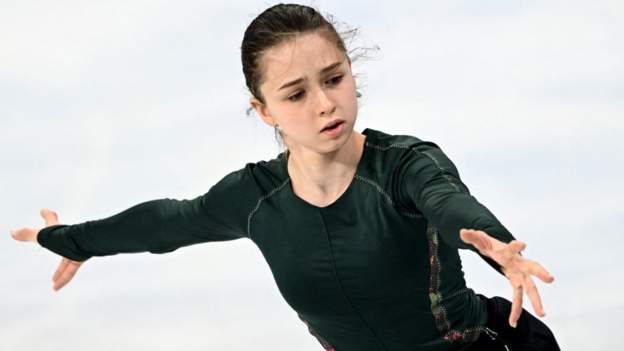 The International Olympic Committee says it would welcome an anti-doping investigation into Kamila Valieva’s “entourage” after the 15-year-old Russian’s positive drugs test.

The figure skater, whose failed drugs test has cast a dark cloud over Beijing 2022, is waiting to find out whether she will be able to compete again at these Games.

The case of a child testing positive for angina drug trimetazidine has prompted questions from many over the role played by the adults around her.

“Entourage has been overlooked in the past,” IOC spokesman Mark Adams told a news conference on Saturday.

“The IOC, as ever, would welcome investigation into the entourage in all cases where it’s relevant. In this case, as in all cases, we would welcome a strong line [from the World Anti-Doping Agency (Wada)] on that.

“Entourage ranges from doctors and coaches, parents everyone.”

Double Olympic figure skating champion Katarina Witt said on Friday: “Kamila Valieva is a young girl and child prodigy, whose highly difficult performances and grace enchanted the whole world at only 15, a minor, depending on adults and she is not to blame here.”

Valieva’s future in hands of court

Kamila Valieva is used to facing judges on the ice but her Olympic future is now in the hands of a different type of panel.

The pre-Games favourite for the women’s gold medal is waiting to find out whether the Court of Arbitration for Sport (Cas) will reimpose a suspension on her.

She had been provisionally suspended on 8 February but challenged the decision and the Russian Anti-Doping Agency (Rusada) lifted it the following day.

The IOC, International Skating Union and Wada have all launched an appeal with Cas against Rusada’s decision to lift the provisional ban.

Valieva had competed in Beijing – even becoming the first female skater to land a quadruple jump at an Olympics – before being notified of the result of a test on a urine sample that had been collected on 25 December.

The medals for the team event, where she helped the Russian Olympic Committee (ROC) finish first, have yet to be handed out because of the legal issues.

And there are questions from the ROC and Rusada over why it took longer than six weeks for the Wada-accredited Stockholm lab where the sample was processed to give the result.

IOC spokesman Adams said he had understood that there “were some issues around Covid” but that he had not had that confirmed and that the matter of the delay was a question for Wada.

Wada has not commented on the delay.

Valieva is due to compete again on 15 February and everyone involved will be hoping for the case to be resolved in time for that but the IOC said the hearing date would not be made public.