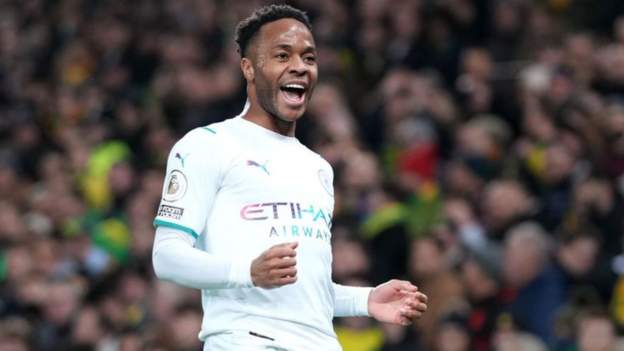 Raheem Sterling scored a hat-trick as Manchester City increased their lead at the top of the Premier League to 12 points with a victory that keeps Norwich in the relegation zone.

The England forward curled in a delightful opener for the defending champions and grabbed his second 20 minutes from time with a simple header from close range.

The 27-year-old completed his hat-trick in the 90th minute but only after Angus Gunn saved his penalty, Sterling tapping in the rebound.

Phil Foden had scrambled in City’s second immediately after the break to put the game beyond Norwich, who earlier hit the post from Grant Hanley’s header.

But the visitors were dominant and always looked comfortable at Carrow Road.

Pep Guardiola’s side are now unbeaten in the league since October. Their closest challengers Liverpool have two games in hand.

The Canaries remain 18th, one point and one place from a position of safety, though they have played more games than the sides around them.

Sterling shines as City march on

With a trip to Portugal to face Sporting Lisbon in the last 16 of the Champions League to come on Tuesday, Guardiola made five changes to his side but sacrificed none of City’s fluid attacking prowess.

Foden had the ball in the net early on but was caught offside by a well-drilled Norwich defensive line and Bernardo Silva struck the inside of the far post with a low, measured effort.

Guardiola continues to insist his side are “in a fight to win the league” despite their healthy advantage over second-placed Liverpool, who visit Burnley on Sunday.

The Spaniard also says it will take more than 90 points to fend off Jurgen Klopp’s side this season and City looked certain to move closer to that target when Sterling opened the scoring just after the half-hour mark.

Kyle Walker’s cross fizzed all the way through to Sterling on the edge of the box and he shifted it on to his right foot before bending a superb effort into the far corner for his first Premier League goal since December.

City have only lost two of their past 46 Premier League games when leading at the break and Foden’s effort straight after half-time made Norwich’s task even harder.

The 21-year-old’s first attempt was blocked by home goalkeeper Gunn at close range and Canaries defender Hanley attempted to hook the second off the line, but to no avail.

City have not lost in 15 league games since a defeat by Crystal Palace in October and, after Sterling added his second from Ruben Dias’ nod down, Guardiola took the chance to give minutes to some of his younger players, with Liam Delap, James McAtee and Kayky all coming on.

It was 19-year-old Delap who won the penalty that led to Sterling completing his fifth league hat-trick for the club, albeit having to tap-in on the follow up after Gunn saved smartly from his initial spot kick.

There appears to have been a shift in mentality at Norwich since Dean Smith’s arrival and the boss said beforehand it was “11 humans v 11 humans”, wanting his side to believe they could trouble the league leaders despite their own precarious position.

The Canaries did start promisingly, taking the game to City when in possession, and Teemu Pukki tested Ederson from an angle before Hanley hit the post with a towering header.

But City can open sides up in an instant and, having not long made a smart stop from the same player, goalkeeper Gunn stood no chance with Sterling’s curling opener.

That seemed to break the hosts’ resolve and they fell victim to City’s ruthless attack, but Smith will be able to take some positives from his side’s performance.

He also knows Norwich’s fate will not be decided by their results against the top two – they have an unenviable trip to Liverpool next – and will want to reproduce the moments when they tested City in the games against their relegation rivals still to come.