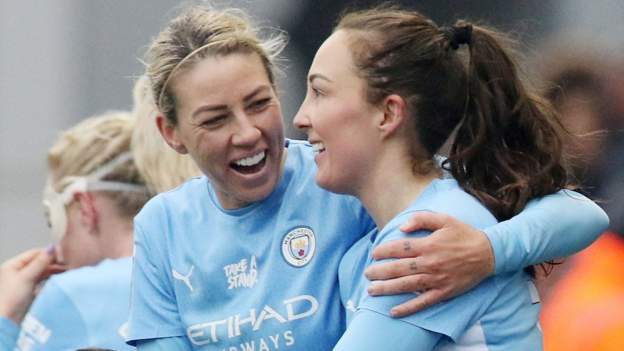 Substitute Weir came off the bench to chip Mary Earps from 25 yards and score in a home Manchester derby for a third successive season.

City created the better chances as Lauren Hemp missed from close range and Jess Park curled on to a post.

The result completely opens up the race for the Champions League qualification spots, with fourth-placed Tottenham able to leapfrog United and move into the top three if they win at bottom side Birmingham later on Sunday.

But it will be remembered mostly for Weir’s stunning impact from the bench as she continued her habit of scoring spectacular goals against the red half of Manchester.

Another Puskas award nomination for Weir?

City have now hosted United three times since United’s promotion to the WSL three years ago and Weir has netted in all three matches, scoring the winner twice.

All three goals have been spectacular, a long-range effort in 2019 at Etihad Stadium and a delicate lob in 2021 earning Fifa Puskas Award nominations for “most aesthetically significant” goal of the year.

Her strike at the Academy Stadium on Sunday was as good as those – and reminiscent of the second – as Weir noticed England keeper Earps a fraction off her line before chipping into the far corner with her left foot.

The goal spared the blushes of Hemp, who steered Park’s cross over the bar from three yards early on – a miss it appeared City would rue as United dug in until Weir’s moment of magic.