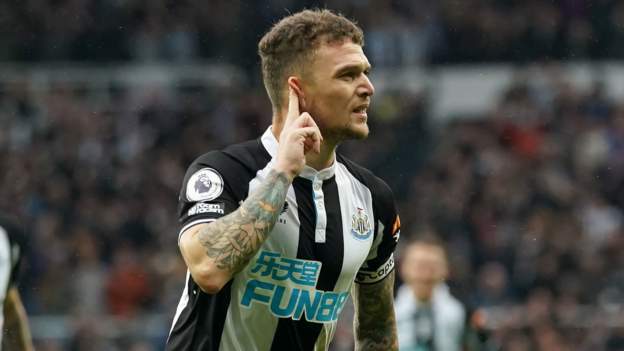 Trippier found a gap through the wall – his attempt hit Emiliano Buendia on its way into the net – after Joe Willock had been fouled by Calum Chambers.

Referee Craig Pawson pointed to the penalty spot but it was downgraded to a free-kick after a video assistant referee (VAR) review.

However, Newcastle were soon celebrating after Trippier – captaining the side in the absence of unwell Jamaal Lascelles – scored from a set-piece for the second time in as many games.

Villa thought they had equalised in the second half through Ollie Watkins’ header, but the goal was ruled out after a long VAR check which deemed the striker’s foot to be offside.

Newcastle’s win came at a cost as Trippier, who arrived from Atletico Madrid for £12m in January, and Javi Manquillo were forced off with injuries.

The game was stopped briefly in the second half because of a medical emergency in the crowd.

Newcastle were three points from safety after a 4-0 home defeat by Manchester City on 19 December.

Two months on and the mood at St James’ Park has been transformed by wins over Leeds United, Everton and now Villa – as well as some good business in the January transfer window.

Dan Burn marked his debut for his boyhood heroes after joining from Brighton by helping them to only a third clean sheet in the league this season.

But it was England defender Tripper who produced the game’s outstanding moment as he repeated his feat against Everton in midweek.

Such has been Trippier’s influence since becoming Newcastle’s first signing since October’s Saudi Arabian-backed takeover that manager Eddie Howe will hope the injury is not serious.

Trippier was a doubt before the game but, by the time he left the pitch in the 48th minute, Newcastle were on their way to another three points.

They remain 17th in the table, but the gap to 18th-placed Norwich at least affords them some breathing space before trips to West Ham on Saturday and Brentford on 26 February.

While the feel-good factor continues at Newcastle, Villa will be disappointed by the circumstances which brought an end to their three-match unbeaten run in the league.

They never really tested Newcastle keeper Martin Dubravka and, while there was more purpose about Steven Gerrard’s side after half-time, Watkins’ disallowed goal added to their frustration.

John McGinn went close to equalising with a deflected shot, but not even Philippe Coutinho, who has been in sparkling form since joining on loan from Barcelona, could inspire Villa.